For Valentine’s Day I made cherry and blackberry fruit jellies. I half-dipped some of them in dark and white chocolate, and rolled the rest in sugar. They ended up distinctly different, even though both kids of treats started from the same foundation.

The ingredients aren’t far off from what you would use if you were making homemade Jell-O blocks. The jellies have a lot more sugar than the gelatine blocks, and the fruit flavoring comes from jam instead of juice. This means that you’ve got the pectin in the jam to help the gelatine do its gellin’ thing, producing firmer blocks. The recipe also calls for citric acid, which is used as a preservative and sometimes as a stabilizer for ice cream.

(Fun fact: Vitamin C, often associated with citrus fruits, is ascorbic acid, not citric. Rather than go off on a tangent about how they differ, I’ll just refer you to here, here, and here.) 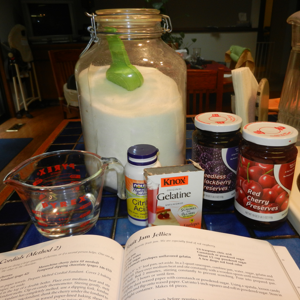 This was one of the simplest candies I’ve tried so far, and probably the only one where the recipes in my two candy cookbooks were almost identical. Mix everything up, bring to a boil for a few minutes, then pour into a well-buttered pan. Then into the fridge for several hours, or in our case, overnight.

It took some effort to get the jelly slab out of the pan after it had set up. When I’d made caramels, that recipe had suggested a pizza cutter to slice up the slab, so I tried it on the jellies as well.

Well, this looks like trouble! He’s standing on a small stepstool, but I suspect it won’t be long until he doesn’t need that anymore. 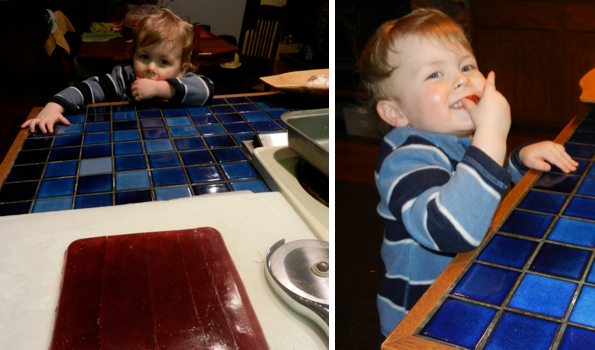 Cornstarch kept the cut jellies from sticking to the pan, the parchment paper, and each other. It also got all over the counter, the floor, and my sweater. You know what’s really dumb? Wearing a black sweater while working with cornstarch. No, you don’t get to see those pictures. 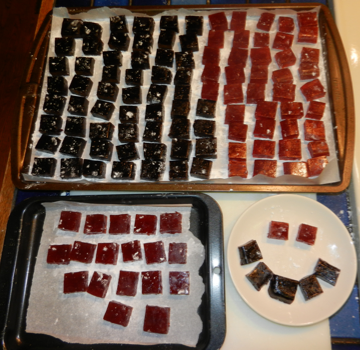 I let them chill for another 24 hours or so, and then got on with the dipping. I used compound coating because it was quick and easy, and because I hadn’t yet gotten any practice with tempering and dipping real chocolate. The blackberry jellies got the while vanilla coating, and the cherry ones got the dark cocoa. 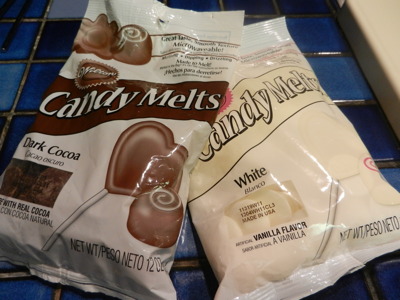 I didn’t dip them all the way because I wanted people to be able to see the jellies inside, not just taste them. It ended up being a lot of work, so I only did about half of them in this way.

The final result! They weren’t as beautiful as I’d envisioned, but they tasted great. I took most of them to work as a Valentine’s Day treat for my co-workers. 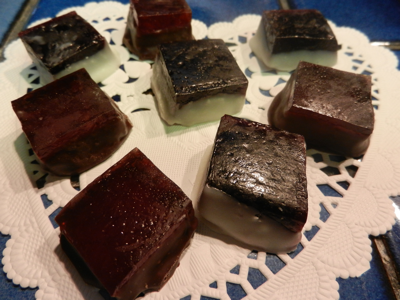 After all that, I still had half a batch of undipped jellies, and I wasn’t wild about doing the compound coating again. Both the books had suggested rolling them in granulated sugar, so after we got tired of nibbling the naked jellies, I gave sugaring a shot.

I found the easiest and least-risk-of-sticking method was to use a spoon to cover the jelly square with sugar and then to roll it around.

The blackberry ones got regular white sugar, and the cherry ones got pink sugar. Colored sugar is super easy to make: one cup of white sugar, plus 10 to 12 drops of liquid food coloring. Combine in a Ziploc bag, and shake the bejeebers out of it. It’s hard to tell from the photo, but I got a nice pink color.

And here’s how this bunch turned out. 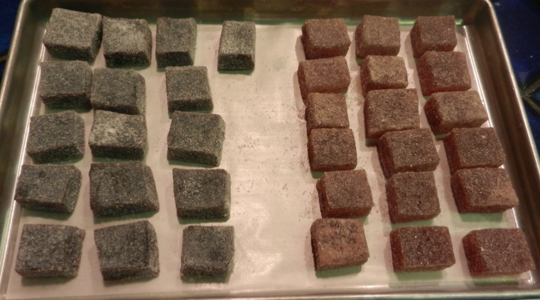 The texture difference between the two styles is interesting. With the enrobed ones, the coating was a solid coating containing a soft center. I’d intended that the jelly flavor would dominate and that the coating would be just a flavored container. But the only way to get that effect was to eat it upside down. If I try this again, maybe I’ll dip the top halves instead.

The sugared ones have a more consistent jelly texture, with the graininess of the sugar as a minor contrast. I was worried that adding more sugar would make them too sweet, especially to the already-very-sweet blackberry jellies, but that turned out not to be the case. They’re much easier to handle too. They’re still sticky, but they can touch each other without fusing into a blob.

As usual (if two posts defines a “usual’) the post-mortem!

Changes for next time:

We made valentines for Kiddo’s class last week. I did some whirlwind shopping on Monday evening, grabbed a few things I already had on hand, and with Kiddo’s help, constructed a dozen valentines for his friends. I was worried that I was going to be That Mom who goes nuts with the DIY crafting. But when we picked up Kiddo and his haul after daycare the next evening, it turned out we weren’t alone in this endeavor.

At any rate, it was a fun family activity for us to do together. We had a hard time keeping on track and needed to take a couple goldfish breaks, and we didn’t finish the insides until after dinner. But I think we all had a good time. I need to find things like this to do more often!

I glued big red hearts onto some blank cards that I had on hand, and then let Kiddo go to town with the heart stickers that I’d gotten on my way home.A couple ended up on his father’s card as well. Then I wrote a greeting on the inside and Kiddo “signed” the cards with a scribble or two.

He had a little trouble getting the stickers off the sheet, so his dad and I took turns helping out. 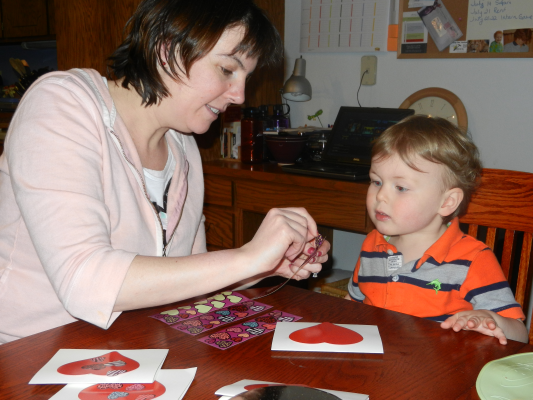 We let Kiddo pick out which ones to use next. 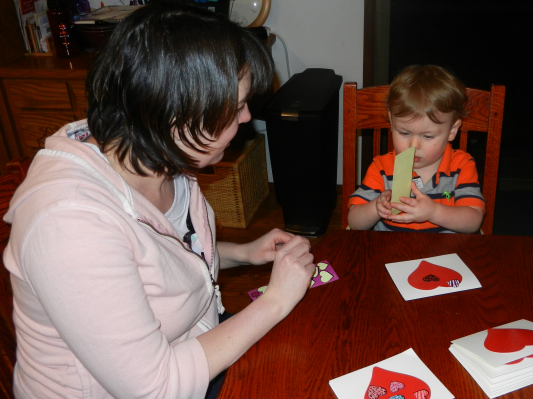 We hope your Valentine’s Day was a good one!