Last week we had a record-breaking snowstorm in the Seattle area. There had been snow on and off for the previous several days, but on January 18 the official measured snowfall was 6.8 inches. That’s almost 2 inches more than the average annual snowfall around here.

It may bring traffic to a standstill and strain email servers as everyone works from home, but it’s also a lot of fun to play in. Kiddo didn’t get a snow-covered Montana trip this past holiday season, so it came to him.

He and his dad set out from the back porch (where we’d measured the snowfall) around to the front of the house.

Once he got to the front, he tromped around by himself for a bit. 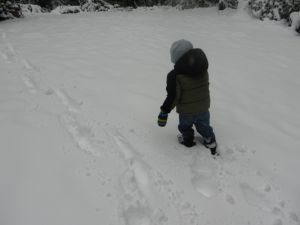 We brought a bucket and shovel out for Kiddo to play with. He loved it. He walked from one spot to another, scooping up a shovel of snow and dropping it into the bucket.  When asked, he told us he was grocery shopping.

Someone taught him how to throw snowballs. It only took him three tries to discover the true purpose of snowballs: throwing them at other people. His favorite target? Mom, of course.

When his grandparents were here a few days earlier, we’d made a snowman with the couple of inches that fell over the weekend. Today seemed like a good day to round out the family. 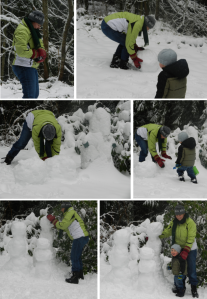 He was clearly having a grand time playing outside…

… but eventually decided he was done for the day, after one too many falls in the deep snow.

Just how deep? Here’s what we measured on the picnic table on the back porch. I think there was even more than that out front.