Who on earth would be crazy enough to plan a two-week road trip–14 consecutive days–with a just-turned-2 toddler?

Oh, right. That would be me.

In my defense, parts of the trip had been in the works well before there was a Kiddo to complicate the plans. But after years of postponing and rescheduling, I finally said, Enough. It’s happening. We’re going to make it work. And amazingly, it not only worked, but turned out to be one of the best vacations we’ve taken as a family.

Our itinerary took us first to Glacier National Park, in the northwest corner of Montana. We then headed south to my hometown, Bozeman, and while there, split our time between the annual Sweet Pea Festival and my 20-year high school reunion.  The following week, my parents, sisters, and I (plus husbands and kids, of course) visited Yellowstone National Park, a couple hours south of Bozeman.

So what inspired this grand tour? Nostalgia, initially. When I was a kid, there were two things my family did on a regular basis: visit Yellowstone at least once a year, and spend Sweet Pea weekend hanging out at the park where the festival was always held. In fall 2008, I was driving on a road that reminded me of Yellowstone, and got the idea that we should take another family trip to the park and revisit some of our favorite sights. And why not schedule it adjoining Sweet Pea, and check off two things at once?

The family was on board; we set our sights on summer 2009 so that we’d have time to schedule time off from work. And then my sister and I both got pregnant about three months apart. Making that trip with months-old babies wouldn’t work out well, we all agreed. In spring 2009, we postponed the trip to the following year.

But a few months later, before I’d gotten around to booking lodging in the park, my husband’s family stepped in with their own plans for an big family August 2010 trip. They’d already picked dates and made hotel reservations when I learned about it. Our little family could have made both trips happen, but it would have meant taking more than three weeks off work, and taking a cross-country flight right after completing a two-day drive back from Montana–and all that with a one-year-old. I was informed that our Yellowstone trip would have to be postponed yet another year.

I’ll confess that I didn’t concede this as gracefully as I could have. I’d been making these plans for a year and had postponed it once already. Now I had to wait not one but two more years? Even now I can still feel some of the ire that was bubbling back then. I reluctantly agreed, but defiantly hammered my stake into the ground: August 2011 was MINE.

Whatever, people said. After all, that was almost two years away. Who knows (and who cares) what we’d be doing then?

I knew. I cared. I started making plans. At first, it was just going to be Sweet Pea and Yellowstone, in some order. Then I remembered that my husband and I had talked about visiting Glacier Park, and that it could be doable even with a young kid. I decided we could fit a Glacier visit into whichever week we weren’t going to Yellowstone. Finally, after that was settled, my high school classmates decided to follow local tradition and schedule our reunion to coincide with Sweet Pea weekend.

It was a lot to cram into two weeks. It was especially a lot considering that by the time the vacation happened, we’d have a two-year-old who needed regular snacks and naps and attention. We were worried he’d protest being cooped up in the car for hours of driving, and that he wouldn’t sleep well in unfamiliar hotel rooms. We knew his little legs didn’t have the stamina to keep up with us on hikes and geyser tours, so we’d need to make accommodations.

However, I’m an organizer at heart, and I was already in the mindset that we were going to make this trip happen, come hell or high snowpack. We found some great tools and techniques that helped make things go more smoothly (more to come on these), we built in downtime for naps, and we kept an open mind toward adjusting the schedule on the fly if needed.

And in the end, it was all worth it. We saw amazing sights that we’d never seen before, revisited others that I’d grown up with, brushed elbows with mountain goats, and spent rare time with family and friends. Would I change anything? Oh sure, looking back there were a few tweaks that could have been made, but nothing major. Would I do it again? Unquestionably. 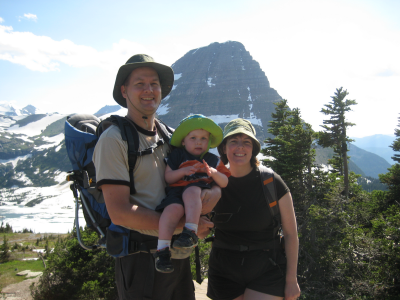