This weekend was the first in months when we didn’t have anything planned.  However, Kiddo’s shoes were worn through at the toes, and my husband had been awake all night dealing with work problems, so we decided to have a Mom-Kid day at the mall and give my husband a chance to get caught up on his sleep.

Our first stop was Stride Rite where we picked up two new pairs: one for indoor wear, and one pair that is a little sturdier and more waterproof. 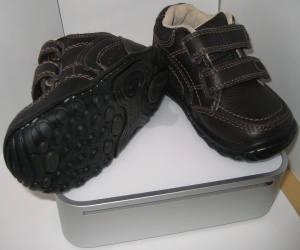 After that, Kiddo and I went to McDonald’s for his first-ever Happy Meal.  The place was crowded with families (it was Saturday, after all) so rather than fight for a highchair, we took a small booth in the back and sat together on the bench.  It was easier to put his nuggets and fries next to him on the seat.  By the way, the cut on his forehead is healing up nicely.

Kiddo was so sleepy during lunch that I thought he was going to nod off in the stroller.  But he perked up afterward–maybe he just needed the food–so we went upstairs to the Kids’ Cove.  This was our first time in a public playspace and I wasn’t quite sure of the proper parent etiquette.  So I just followed Kiddo around, trying to not be too overprotective but also trying to keep him from getting too run down by the bigger kids. 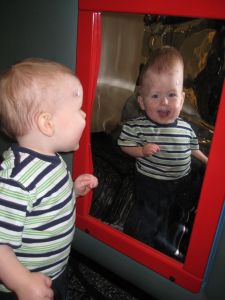 We took a break and went downstairs for a snack, and to wait for my husband to arrive.  Once we were reunited, we went back upstairs to check out the play place again. 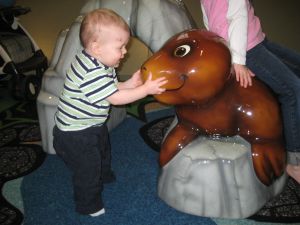 Before long, we could see that Kiddo was drooping, so we bundled him into the stroller and did some shopping, hoping he’d fall asleep.  It didn’t take long.

We ended the day with dinner at Matt’s Rotisserie in Redmond Town Center.  While we were there, a bunch of cars from the local exotics club were driving through.  One of the organizers told us it was for a music video.  It was pretty neat watching them all pass by below us. 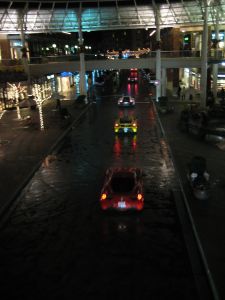